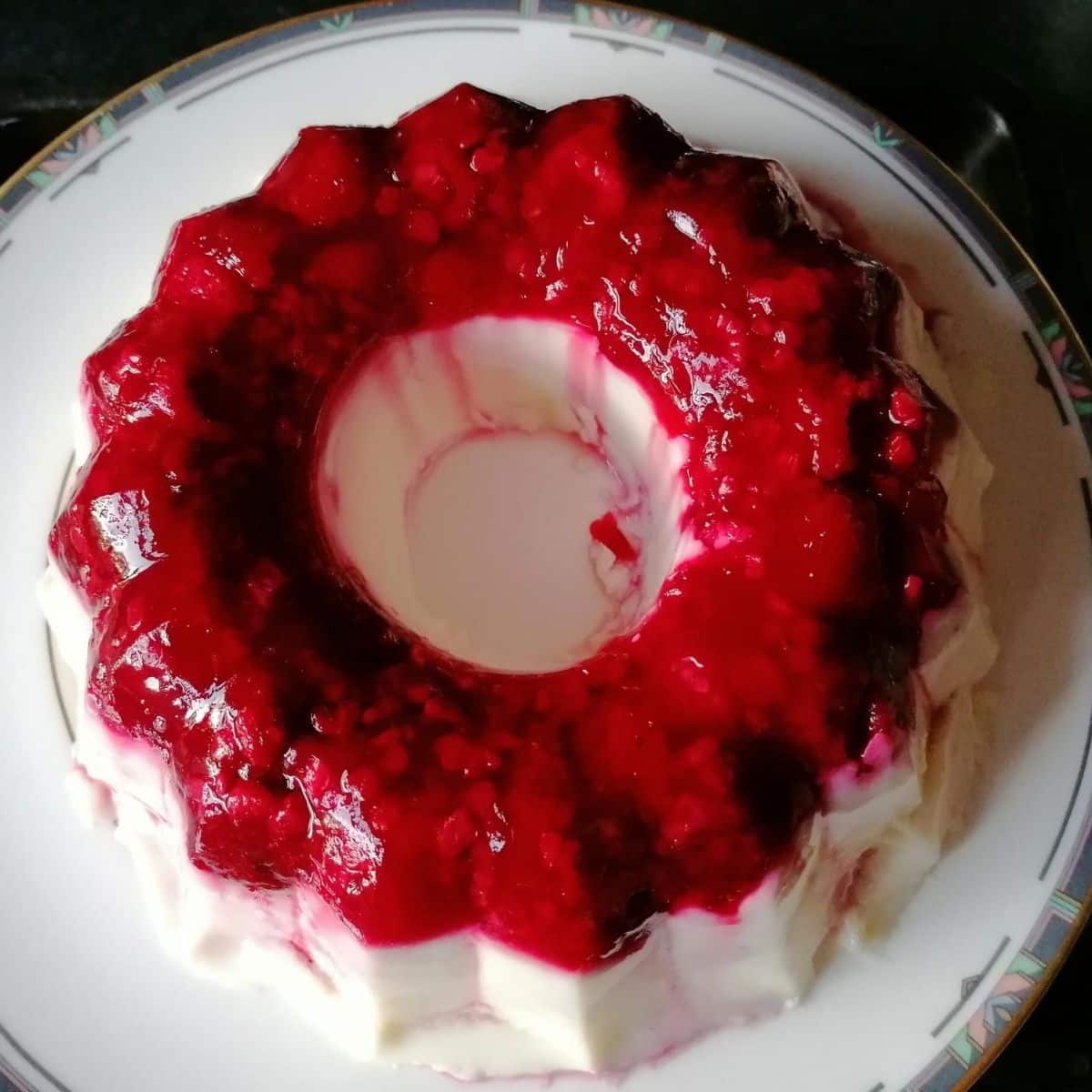 Silky smooth and milky with a refreshing taste of raspberries is what this agar-agar milk pudding is about. A perfect summer dessert after your meal.

What is milk Agar-agar pudding?

It is a dessert made of agar-agar mixed in milk, and you enjoy it as pudding after your main course.

This agar-agar pudding is very popular in Indonesia. In fact, the word pudding is almost always associated with this type of agar-agar based dessert. And traditionally, it uses coconut milk as its liquid ingredient.

But you can use any kind of milk or liquid to make it.

Like anything, you can mix and match the ingredients and flavour according to your liking.

As for this recipe, I use cow milk as condensed milk and add raspberries to pair with.

So you will have the creamy milk taste with refreshing and slightly tangy raspberries flavour that goes with it.

This agar milk pudding will remind you of Italian panna cotta or French blancmange. But without gelatine. So it’s a good choice for those who prefer the vegetarian or halal option of panna cotta.

And if you’re vegan, you can always substitute the milk and condensed milk with your preferred vegan options. Or, just use coconut cream instead, like this vegan panna cotta recipe.

This jelly-like pudding is a perfect option for a summer dessert.

Not only are the raspberries abundant in the summer season, but the agar-agar will cool you down when the hot temperature is on the rise.

Now that the fasting month of Ramadan is around the corner, I must say this agar-agar milk pudding with raspberry is a must-try for your iftar.

Is Agar-agar the same as China grass?

Yes, agar is called China grass by the people from the Indian subcontinent.

Maybe because agar was invented in the Far East, which is Japan. And it has always been very popular in Japan, China, Taiwan, Indonesia etc.

Can I replace agar with gelatin?

Technically, you can substitute gelatin with agar. As both have the gelling property that makes any liquid set.

In fact, now the vegans use agar for any recipes that call for gelatin.

How do you make China grass pudding?

You mix the china grass powder with the liquid. And you can use water, milk, or fruit juice as the liquid. Add sugar and other ingredients you like for flavour.

Then you boil them as you stir well until it reaches boiling point. Keep mixing for another 2-3 minutes before and after turning off the heat.

Pour the mixture into your preferred mould or dessert pan. And let it cool down and set.

What is the ratio of agar to liquid?

The more liquid you put, the softer your pudding will be. And if you want your pudding to set firmer, you should put less liquid.

The other ingredients can make a difference to your pudding texture as well.

Milk and fruit acids can soften the texture that your China grass pudding will have the melt-in-the-mouth consistency.

Why is my agar-agar not set?

There are a few possible reasons for your pudding not being set.

Firstly, it has too much liquid that you need more China grass powder. Secondly, it is not cooked long enough and not stirred well enough.

Make sure you let it cook more after the mixture reaches boiling point. And keep stirring before and during the boil. I usually cook further for about 3 minutes and sometimes longer.

Also, keep stirring for another minute or two after turning the heat off.

How much sugar do I need to put in?

In general, I put about 200 grams of sugar for every 700 ml of tasteless liquid such as water or milk.

However, if I put other ingredients that have sweetness i.e. condensed milk, sweet fruits, etc., then I would put less sugar.

I must also note that everyone has a different level of the sweet palate. Admittedly, I don’t really like too-sweet desserts. Therefore, my dessert and cake recipes use less sugar than recipes alike.

Thank you for stopping by to check this agar-agar milk pudding with condensed milk and raspberries. I hope you’ll now want to try it.

If you do, please share what you think about the recipe in the comments below (leave a reply box). I’ll really appreciate it.

Last but not least, don’t forget to look at my other Indonesian dessert recipes that you’ll equally love.