This chicken biryani recipe is quite simple and easy to make. It’s a recipe that I am now using after countless attempts to get the right balance of spices for chicken biryani.

Traditionally, there are many biryani recipes – both in Pakistan or India. And I have been lucky to try so many of them. And if you go to Asian shops, you can find endless choices of ready-made biryani spices that can help your cooking easier. However, I find they are quite spicy as they have a high-content of hot chilli powder.

When I tried to cut down the spices, the biryani flavour was not quite right. So, in the end, I tried to make my own spice mix. And after testing it for so many years, I am settled with this recipe. Because it is easy and quick to make, yet it offers a flavour that is very close to authentic.

And I’m happy that every time I make this chicken biryani, it always goes down well among my family and friends.

This easy chicken biryani recipe doesn’t use a lot of chilli powder. So, it’s mild enough for children or those who are not good with spicy food. And if you prefer the spicy biryani rice, you can increase the chilli powder in it.

When and how to enjoy chicken biryani

Traditionally biryani rice is enjoyed as a part of festive or celebration food such as Eid, weddings, family gatherings, etc.

But now, people cook biryani rice whenever they feel like it. I personally cook chicken biryani almost once every two weeks. Because it really is an easy dish to make. It’s like a one-pot dish. Though you initially do have to cook the rice and the chicken biryani masala separately.

Chicken biryani is the dish that has the carbs and the protein at the same time. So you’ll only need a vegetable salad or a simple vegetable side dish such as Aloo Palak.

The key ingredients for chicken biryani

You can use any type of chicken. I prefer boneless chicken because it cooks faster and my kids are not keen on chicken with bones.

In essence, you can cook your biryani with any type of potatoes. But just make sure you choose the waxy potatoes such as Charlotte potatoes, new potatoes, and Jersey Royal. The reason is that they hold their shape well and do not break easily.

I try to make chicken biryani masala with fresh tomatoes more often than not. However, in the case of me running out of fresh tomatoes, I sometimes use canned chopped tomatoes. For this recipe, you only need about 1 ½ can of canned tomatoes.

If possible, try to get natural yoghurt from Asian shop. Because it tastes tangier that enhances the flavour of the spices. But don’t fret if you can’t get hold of it, you can still make delicious chicken biryani by using regular natural yoghurt.

Just stay away from Greek-style yoghurt, because its creaminess can create the whey spots on the biryani masala.

Basmati rice is the best choice for this chicken biryani recipe. The closest substitute option for it is long grain rice.

I personally use rapeseed oil or sunflower oil.

How to cook chicken biryani

So firstly, wash the rice and soak it in the water.

Then you make the masala. Fry the onion until lightly golden, and then add all the spices, herbs and salt. When it gives aroma, you add the chicken in and fry at medium-high heat a little bit until the poultry has become opaque.

After that, add in the tomatoes, and continue cooking for about 15 minutes before you add the potatoes. Try to mash the tomatoes every now and again. So that you’ll get a smooth sauce.

Leave the chicken and the potatoes to cook with the lid on. Take care and keep checking every now and then.

At the same time, start boiling some water for the rice. When the water boils, put the rice and cook it until it is half-done. To know that the rice is ready to mix with the masala is its texture should be firm but not as hard as the raw rice.

Good biryani rice holds its shape and has a firm texture and doesn’t go mushy when you spoon it. And to achieve this, you have to keep an eye on the boiling rice. Making sure the rice is not fully cooked yet by the time you mix with the masala. So you’ll have to time your masala to be ready before your rice is ready.

Back to our masala.

When the chicken and potatoes are fully cooked with about 1-1 ½ cup of sauce, and the oil slightly separates from the sauce, add in the beaten yoghurt and quickly stir the chicken biryani masala. Let it cook further for a minute or two before you turn the heat off and get on with the rice.

As soon as you see the rice slightly plumped up but still looks quite opaque, and have a firm bite to it, take the rice off the heat. And drain the rice using a colander. Make sure you drain all the liquid from the rice.

Then pour the rice over the chicken biryani masala and spread it evenly. Line the inside lid with a tea towel – to stop the steam water drip on to the rice, put the cover on and cook the rice at medium-low heat. When the steam comes out of the pot, your chicken biryani is ready.

I hope you like this Chicken Biryani recipe and are now thinking of trying it out. If you did, it would be great if you share what you think about it in the comments below so that others will benefit. Feel free to share the post with your loved ones and pin it on Pinterest.

Before you go, don’t forget to check out my other recipes that can go well with this chicken biryani. 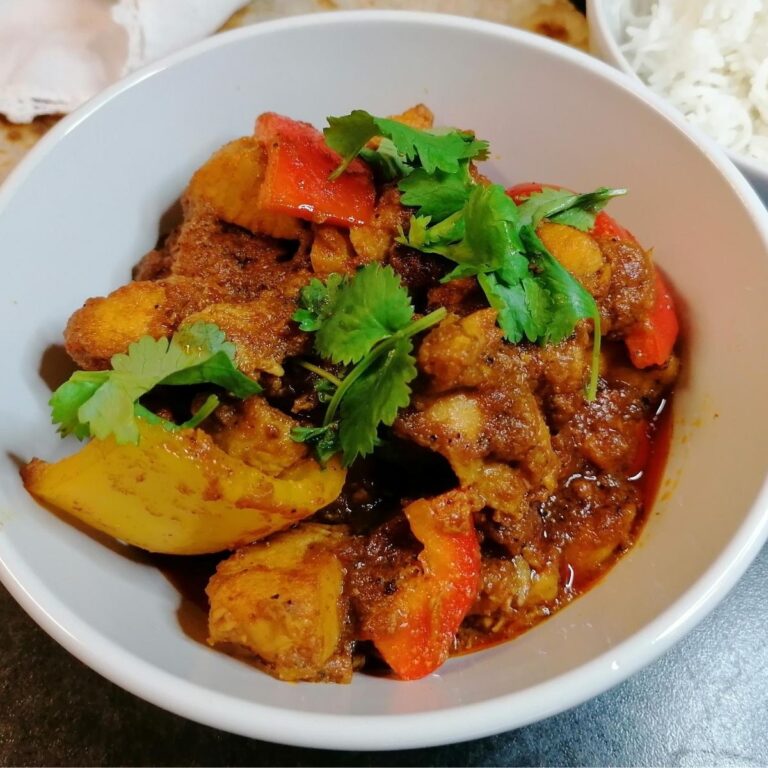 This chicken and peppers curry have a spicy aroma with the succulent chicken and sweet juicy bell peppers. It’s a good choice for your next curry night and I promise your loved ones will be grateful to you.

This Pakistani whole Mung bean dal, or Mung bean curry recipe, is a comfort dish you’d like to enjoy with plain Basmati rice, naan bread, chapati, or pitta bread. You can cook it in a pressure cooker for only 15 minutes that it’s become an easy nutritious menu when you don’t have much time. 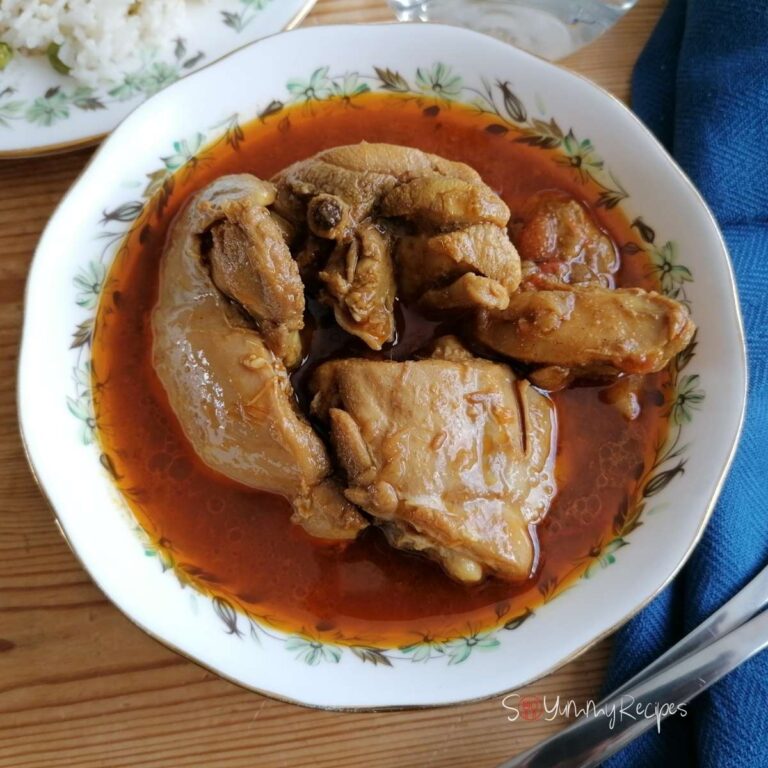 Chicken Shorba is just another type of chicken curry in Pakistani cuisine. Unlike chicken karahi that is slightly dry with little gravy in it, chicken shorba is a curry with soup-like gravy. 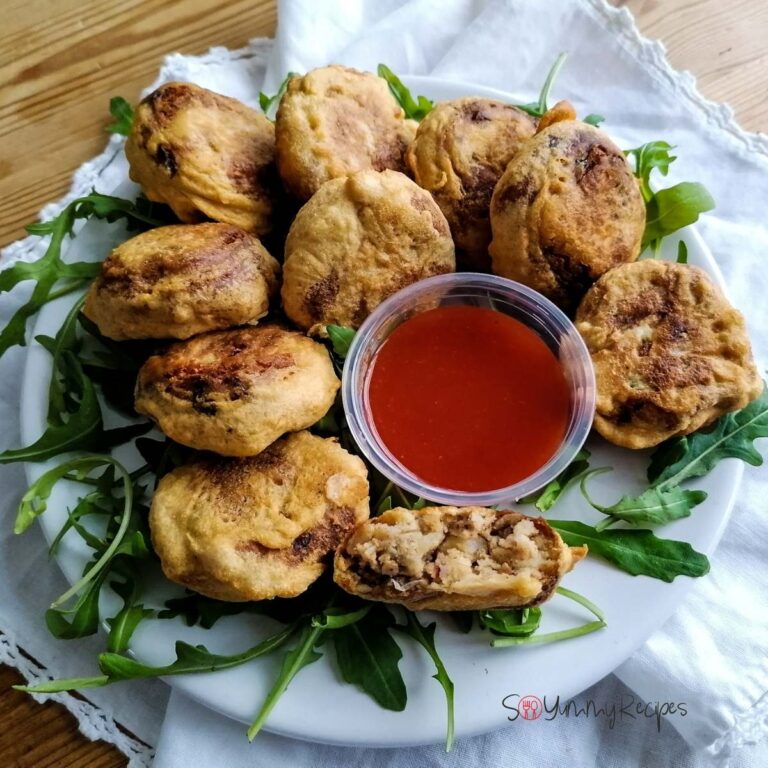 Aloo Tikki is a potato cutlet with a well-balanced aroma of spices and herbs. Enjoy it as is or as a filling in pita bread, flatbread or tortilla wrap and have it for your packed lunch and a picnic. 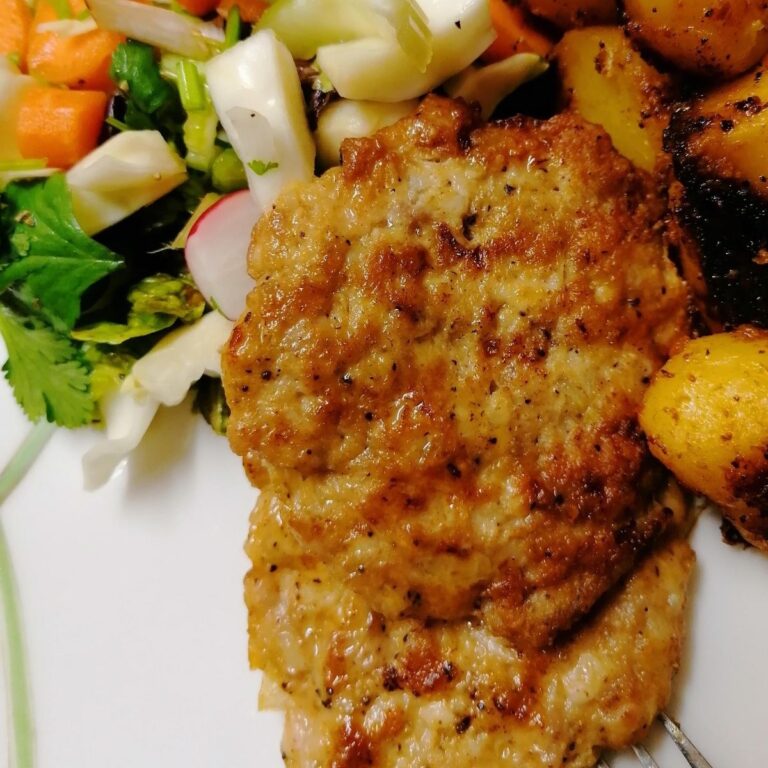 This easy to make chicken kebab recipe uses minced chicken. It makes delicious kebab patties that will please everybody, including your little ones.

Keema Paratha is minced meat stuffed flatbread that is delicious to enjoy with a dollop of plain yoghurt. The meat has well-balanced spices and the bread is between crispy and moist.