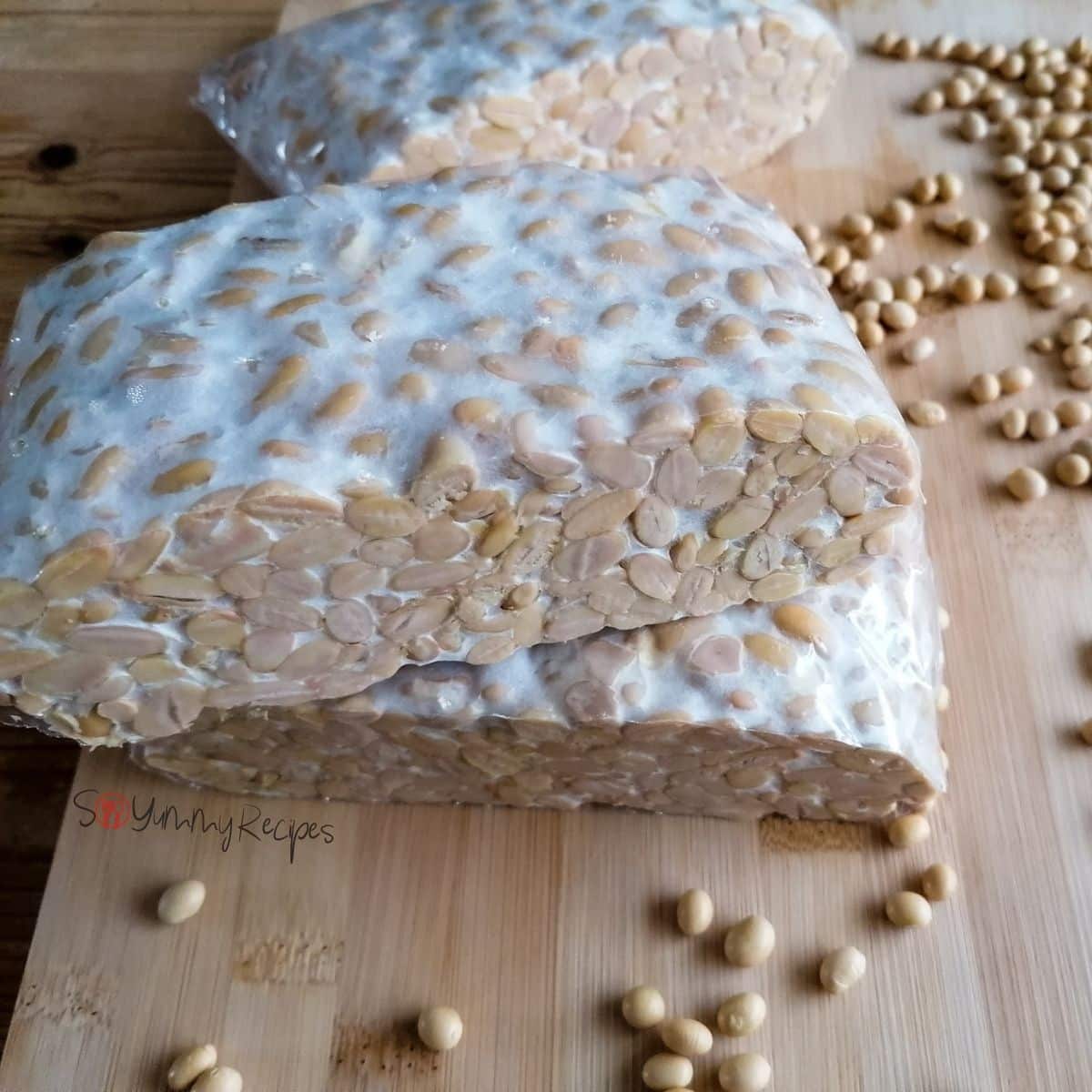 Tempeh As Our Staple

Tempeh is one of the main cooking items in Indonesia that whatever part of Indonesia you go to, you will find tempeh in their local menus. And it’s almost always paired with tofu that Tahu Tempe which means tofu tempeh can be considered as a must-have among Indonesian food menu.

I grew up eating these two almost every other day. And I never got tired of eating them. Maybe because my mom cooked them in different ways almost every time.

The taste of tempeh itself is pretty bland (if not very bland). Because it literally just tastes like soft cooked beans with fermented flavour.

Therefore, you have to cook the tempeh to make it delicious to eat. One of our favourite ones was Perkedel Tempe (tempeh fritters).

In Indonesia, tofu and tempeh are cheap and cheerful cooking ingredients as it’s full of protein that makes your tummy full and happy.

And I didn’t realize that I took this fermented soya bean for granted that when I relocated to the UK I really missed it. Because no place sold it.

For a few years, I didn’t have it until one of my Indonesian friends started making tempeh herself. At the time, she had to bring the tempeh starter all the way from Indonesia whenever she went there. And she shared some of her creation with me.

The Humble Tempeh That Become Popular

Though my friend encouraged me to try making it myself, I was never interested. Because from what I learned from her, the process of making tempeh was a bit of a hassle.

You have to dehull the soya beans before you cook them. And from what I saw my friend, it was a long tedious job to do. So making tempeh was not practical for me to do as my son was still a baby at that time.

And of course, there was the challenge of getting the starter. Unless you went to Indonesia, you wouldn’t have the starter.

So I never thought about making my own tempeh.

Besides, after a few years, I found some Asian shops in Chinatown that sold it. I thought since it’s now becoming popular, I didn’t have to make it at all as it’s easier for me to just buy.

The only downside was that the tempeh that I bought from the shop tasted different from the original one from Indonesia and the one made by my friend.

So I stopped buying.

Some years later, I came across Tempeh Starter on Amazon online. I thought, wow, that’s interesting.

Then I researched and learned some recipes and tutorials on how to make tempeh. Of all so many recipes that I came across, I like the one by Vegan Lovlie. Because she uses a simplified method which is without dehulling the soya beans.

This made me interested as I didn’t want to bother myself with dehulling the soya beans.

After trying many times, I am now happy with the further simplified method that can help me make delicious tempeh with the least effort and time.

Not only does my method skip dehulling the beans, but it also uses a pressure cooker that saves time and is more practical.

And when it comes to taste, this method yields one of the best tempeh I have ever tried. The beans taste creamier with the firm texture of the whole thing. And the apple cider vinegar gives the fermentation a slightly fruity smell.

You only need soya beans, tempeh starter and vinegar.

As mentioned above, I use organic soya beans. Because not only is the price not that much different from the non-organic beans, I believe that all organic stuff has better quality, don’t they? And I also thought that as I go to the trouble to make this tempeh, I may as well do it properly by using good quality ingredients to make better stuff.

I bought my starter at Amazon and it is enough for about 8 recipes. So I’m happy with it.

Originally, white vinegar is the common acidic ingredient for making tempeh. But I use Apple cider vinegar because I find the smell is not as strong. In fact, the ready-made tempeh smells better than the usual.

In essence, there are only three steps to making your own tempeh at home.

Firstly, you wash and rinse the soya beans. Then you soak them in plenty of water for at least eight hours or overnight.

On the following night, you will see the beans plump up in at least double size. Then you drain the water.

Note: if you like gardening, you can use the soaked water to water your plants as it has nutrients from the beans that are good for the plants.

When the beans are cooked, you can see some skins of the beans floating around. Discard them and drain the water.

Again, you can use the water for the plants. Just collect the water in a bowl and leave it to completely cool before you water the plants with it.

Place the cooked beans on a tray and let them cool down to about 35°C/ 95°F. Then stir in two tablespoons of apple cider vinegar. And sprinkle one teaspoon of tempeh starter. Mix well and thoroughly.

Thirdly, pierce a 5”x7.5” ziplock bag with a skewer all over it at an inch apart. Then spoon the soya beans into the bag and zip it.