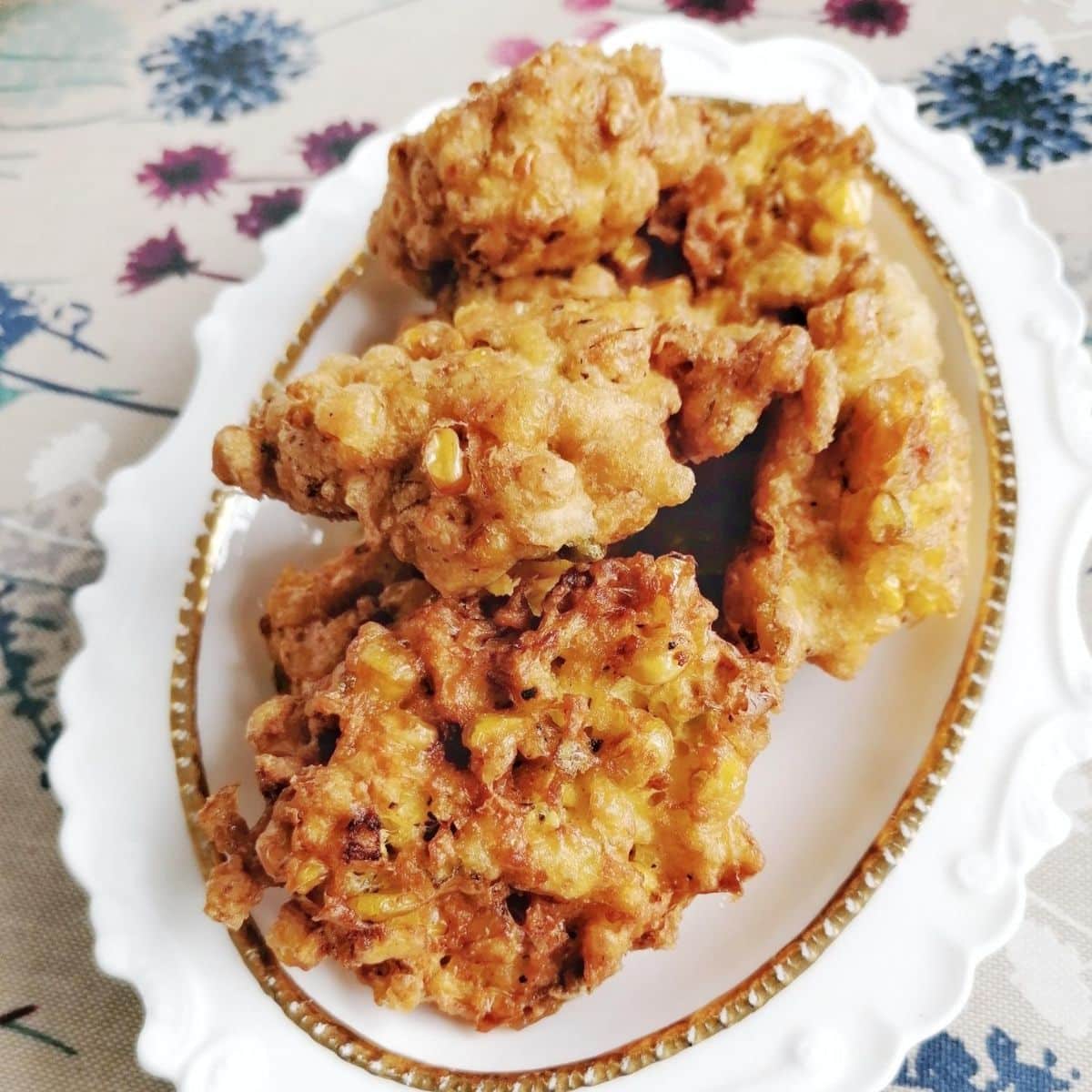 Perkedel Jagung, which means sweetcorn fritters, are quite popular in Indonesia.

It is a finger food that is often enjoyed as a side dish as well as afternoon snacks.

Just like any food recipe, there are hundreds of sweetcorn fritter recipes out there. In the cookbooks and on the internet. Although I haven’t tried all of those recipes — I only tried some of them for the sake of being curious — I’m confident that the recipe I’m sharing here is the best ?.

The reason I say this is because some recipes use many ingredients so it can be a hassle (for me) to get those ingredients just for the sweetcorn fritters. Or the corn fritters just taste like a fried-flour-lump ?.

Also, I notice that some of my Indonesian friends make Perkedel Jagung in different ways. Most of them put water in the mixture that makes the corn fritters absorb a lot of oil when you fry them.

And some others put quite a lot of flour in the mixture that you can hardly taste the corn.

So if you only have one chance to try making sweetcorn fritters, I dare you to try my recipe and tell me if you hate it ?. Because I’m pretty sure you’ll love it, just like my family and friends who have tried them ?.

The reason is that not only the recipe I’m sharing here is quite simple, but it also makes the fritters with the most sweetcorn taste. With a bit of crunch on the outside and a fluffy bit in the inside. And the corn fritters are just full of real sweetcorn flavour.

I learned this recipe from my mom. It’s quite different from other sweetcorn fritter recipes you might have come across.

But I promise you it’s so easy to make. And it’ll give you yummy sweetcorn fritters that you and your loved ones will enjoy.

A warning though… When you do make them, I suggest you hide some of them for yourself before everybody gets their hands on those tasty fritters. Otherwise, there won’t be anything left for you by the time you finish making them ?.

What to serve with the sweet corn fritters

Traditionally, Indonesians have sweetcorn fritters as a side dish. Although they go along well with literally any dish, my mom normally makes them as a companion for Sweet Soy Chicken dish, stir-fry dishes, or any soupy/ curry dishes.

But you can also have the corn fritters as a snack along with your cuppa tea or coffee if you like. I also make them for the picnic or barbecue snacks sometimes.

Before I go on with the recipe, let me tell you that in Indonesia, there are many types of traditional vegetable fritters. For example potato fritters, tempeh fritters, Oncom fritters (a kind of fermented Soya beans), Mung beans fritters, etc. But in our family, sweetcorn fritters are the most liked ones.

My mom used to make them every so often that I literally grew up with these sweetcorn fritters.

When you use frozen sweetcorn, leave the kernels to fully thaw about half an hour before you follow the recipe method.

Although in this recipe I only put 4 stalks of Spring Onions (Scallion), you can always put more. I often put in more spring onions. Because I think Sweetcorn and Spring Onions are a really nice combo.

You can either use fresh garlic or garlic powder. Both are good.

White pepper is commonly used in Indonesia. But here in the UK, I use black pepper more often than not. And ground black pepper is good too for this recipe.

Two eggs are enough for this recipe. But for sweetcorn fritters vegan option, you can substitute the eggs with gram flour.

This Perkedel Jagung doesn’t use a lot of flour. You only need approximately 55 grams/ 1.92 oz of plain flour/ all-purpose flour.

If you use Gluten-Free flour, it’s best to shallow-fry the fritters. Because some of the GF flour does not handle well in deep frying.

I personally use either sunflower oil or rapeseed oil. And I deep-fry the fritters almost every time I make them.

How to make the yummiest sweetcorn fritters

Please don’t skip mashing the kernels. It’s important ?. Because we want the right sweetcorn flavour and sweetness in our sweetcorn fritters.

The mashed kernels will give more flavour to your corn fritters. Also, the juice from the corn kernels can help bind the mixture so that you won’t need a lot of flour. Your Perkedel Jagung will have a taste of proper sweetcorn instead of sweetcorn flavoured flour fritters?.

Thank you for reading the post. I hope you’re now thinking of trying this sweetcorn fritters recipe. If you do, please share what you think about it in the comments below so that others can benefit too. Feel free to share the recipe with those who may need it and pin it in your Pinterest.

Before you go, don’t forget to check my other recipes that you may like.