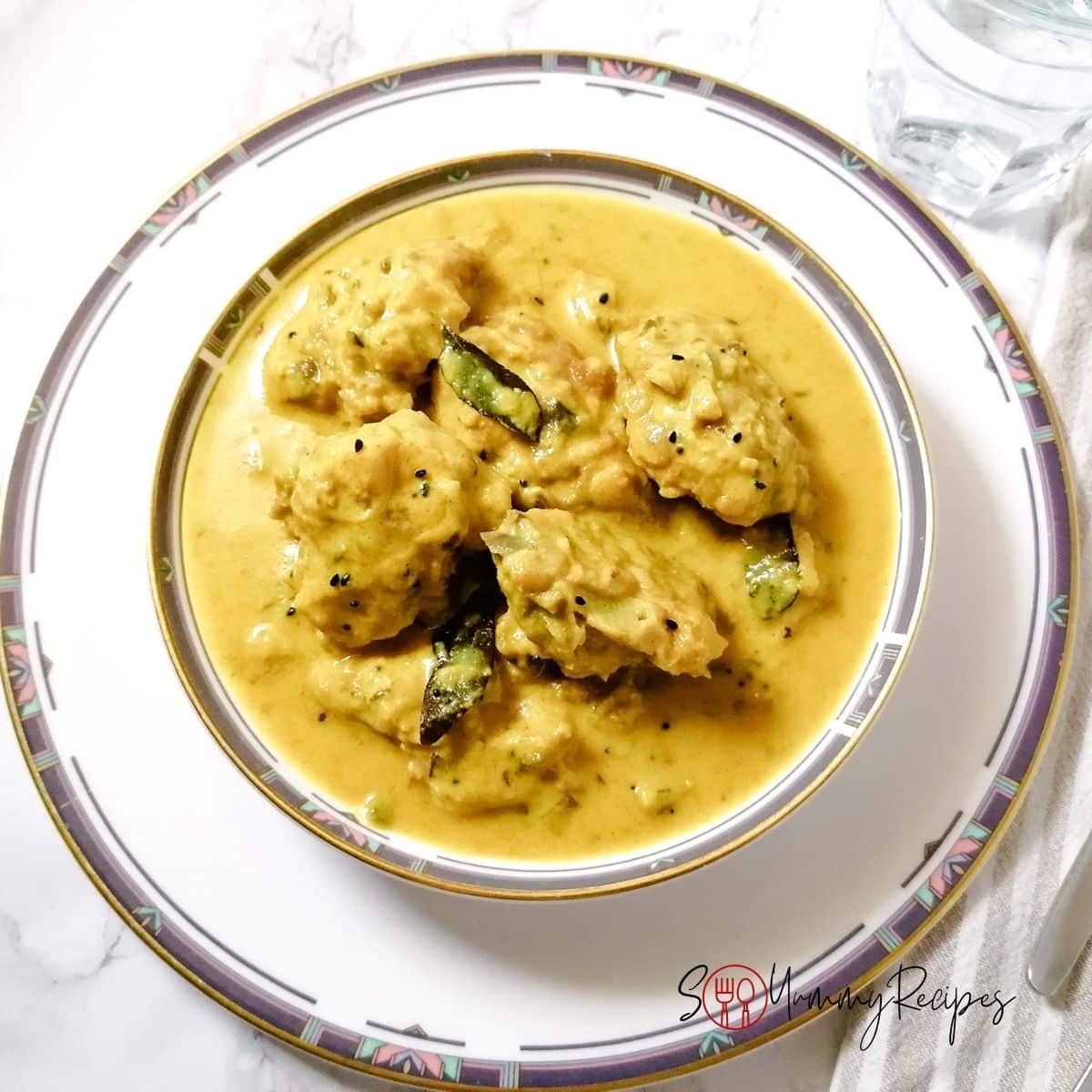 Kadhi pakora is mouth-watering pakora dumplings in creamy spiced yoghurt sauce. It is a savoury delicacy that you enjoy as it is or served with hot plain rice. A must-try if you never had it before.

What Is Kadhi Pakora?

The pakora itself is just potato and onion fritters in spicy chickpea flour batter then deep-fried until golden and crispy.

Both the pakoras and the yoghurt sauce are pretty simple and easy to make. But it may take a bit of time and effort because you have to prepare two main things before you cook them together to make kadhi pakora.

This creamy and luscious savoury dish is popular among Indian and Pakistani foods.

Just like most traditional foods, there are numerous ways of cooking the dish. And the recipe I’m sharing with you here is based on the Pakistani way that my extended family passed the knowledge on to me.

The first time I tried the dish, I was confused. Because I was told that we were having a curry. So I was expecting meat or vegetables cooked in spices and tomatoes gravy type of food. Just like curry. Instead, I was having a bowl of pale looking creamy sauce with soft-ish dumplings sticking out of the gravy.

And when I tasted it, I thought it was delicious. It’s like having squishy dumplings with lots of comforting gravy. My sister in law said this is what they actually call “curry”, from the word “karhi”.

Some people call it “Pakora Karhi” or “Karhi Pakora”, others call it “Kadhi Pakora” or “Pakora Kadhi”. All refer to the same thing.

And the curries (the one with the spicy tomato-ey gravy) that I was thinking of are what they call “Salan”. At least, that’s how most Pakistanis address their food.

What Goes In Pakora Curry

Essentially, there are two key components in this curry dish. The first one is pakora – which is spicy potato and onion fritters.

And the second one is spiced yoghurt sauce.

So, potato, onion, gram flour, yoghurt and spices are the main ingredients for this Karhi Pakora.

A little note here. Traditionally, Kadhi Pakora doesn’t use black seeds (Kalonji). So this is optional. The reason I use it is that I love its smell and its health benefits. Feel free to omit it if you don’t have it or don’t want to use it.

How To Make Kadhi Pakora In Pakistani Style

Mix the yoghurt based sauce

Firstly, you want to prepare the base for the yoghurt sauce. Beat the yoghurt until it’s light and fluffy. Then add in the gram flour before you continue mixing until you get a smooth and thick yoghurt mixture.

After that, you add the ground spices such as ground cumin, ground coriander, turmeric powder, chilli powder, ginger garlic paste, sugar and salt. Beat the mixture until it becomes smooth again. Then add the water as you keep stirring and mixing until it becomes a smooth batter with the consistency of double cream/ heavy cream. Set aside.

Secondly, you want to make pakoras. Peel and chop the onions. Wash and rinse the potato and chop it into smallish cubes. Put these veggies in a bowl together with the gram flour/ chickpea flour and the rest of the pakora ingredients. Stir well until all is blended and get your frying pan/ wok ready.

Heat the oil in your frying pan/wok at medium heat. Ensure you get the right temperature. The oil should be hot enough, but not too hot. Test it by frying a tiny drop of batter from your pakora mixture. It should fry steadily and not too fast. If it fries quickly, you can turn the heat down to lower the temperature.

Carefully slide a teaspoon of pakora mixture at a time and leave a gap between each spoon. Fry for about 3-4 minutes before you turn them and cook until the pakoras look golden in colour. Continue frying until all the pakoras mixture is finished. Set aside.

Cook the yoghurt and the pakoras in the sauce

Thirdly, you want to cook the pakoras and the yoghurt sauce base.

Heat two tablespoons of oil in a large cooking pot. And fry the whole spices such as black mustard seeds, whole cumin seeds, and black seeds/ Nigella Sativa in the oil until they are all sizzling. Then add the curry leaves and continue frying for a minute or two.

At the same time, get the yoghurt sauce base ready by giving it a good stir. Carefully pour the sauce into the sizzling spices and gently stir it. Put the lid on the pan/ pot, and cook the yoghurt at medium-low heat until it reaches boiling point.

Once the yoghurt sauce is boiling, leave it to simmer until it gets thickened, and yoghurt looks a bit shiny.

Then you add the pakoras to the yoghurt. Give it a good stir so that all the pakoras are covered with the sauce. Put the lid back and cook your Kadhi pakora at low heat. Let it simmer until all the pakoras become soft and fluffy for about 10-15 minutes before you turn the heat off.

Tips for the best Kadhi Pakora

Cut the potato to a similar size and not too thick.

Ensure the pakora batter is not too runny. You want a consistency that is thicker than double cream/ heavy cream. If it’s thinner, the pakoras may break when you cook them in yoghurt sauce.

Beat the yoghurt really well, smooth and fluffy. And make sure it’s at room temperature so it won’t break and curdle when you boil it.

Make sure you fry the whole spices until they’re crackling and smelling nice. So they will give a delicious fragrance to the yoghurt.

In my extended family, we eat this Karhi Pakora/ Kadhi Pakora with roti/ chapatis. But many people enjoy it with plain Basmati rice. And I tried it recently and found myself enjoying it very much.

Thank you for reading this post. I hope you are now interested in trying this kadhi pakora recipe. When you try this recipe, it will be great if you can share what you think about it in the comments below (leave a reply box).

Last but not least, don’t forget to check out my other recipes for Pakistani snacks that you may love.