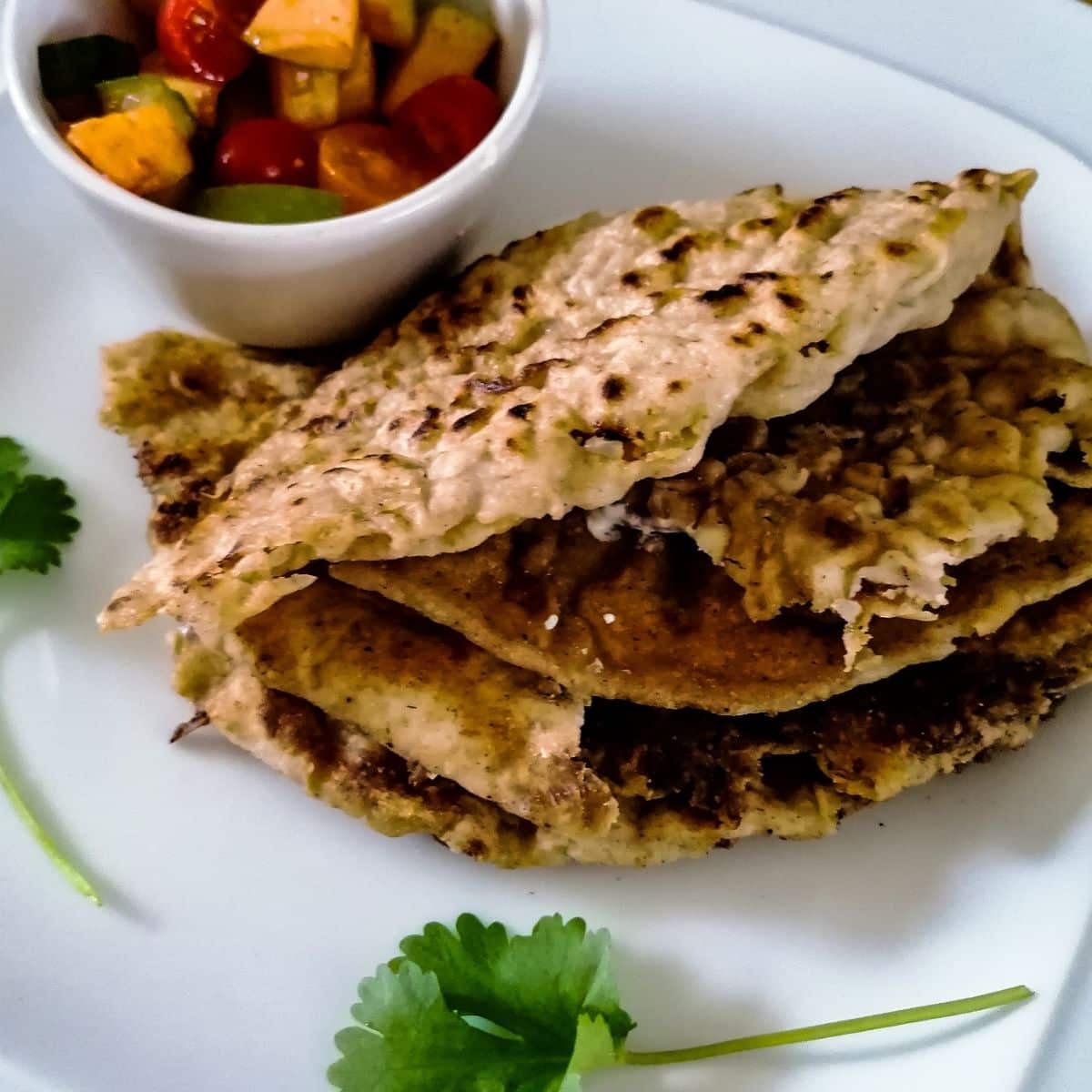 The word keema refers to minced meat. Technically, it can be any type of meat such as beef, lamb, or chicken. However, the keema in this recipe refers to either lamb or beef minced meat.

This post contains affiliate links. We may earn a small commission from qualifying purchase without extra cost to you. Please check our disclosure for further info.

As for the word paratha, it is basically an unleavened flatbread that is cooked in fat. Traditionally, Indians and Pakistanis use ghee (clarified butter) or cooking oil to make parathas. I personally am not a big fan of ghee. So, for this recipe, I always butter and a little drop of cooking oil.

Keema Paratha is similar to Lebanese Arayes. The difference lies in the bread and the spices.

Arayes often use thick flatbread such as pitta bread. And just like any other Lebanese foods, the meat in Arayes does not use lots of spices. Particularly chillies. So it’s rather bland compared to Keema Paratha.

The recipe I’m sharing with you here is based on the one that I’ve learned from my sister in law. It’s a Pakistani way of making paratha.

Before I tried her paratha, I had eaten Keema Parathas from many restaurants. And I find the bread is so thick that I can hardly taste the meat.

On the contrary, my sister in law makes her paratha in such a way that the bread bit is not too thick and you can taste the minced meat.

Also, she uses well-balanced spices in the meat that is not overpowering, but you can still smell its aroma.

In short, to me, her paratha is the best.

I may sound biased, but then again, when it comes to tastes, we all can be biased. Depends on our personal preference ??.

How to enjoy Keema Paratha

You can eat Keema Paratha with plain yoghurt and some fresh salad.

Because it is quite rich in flavour and fat, you don’t really need anything else.

I believe that this delicious fried-roti stuffed with minced meat is traditionally enjoyed as breakfast on the weekend.

However, I personally make it for either lunches or dinners. Simply because we find the dish is a bit too heavy for breakfast ?. And for the same reasons, I don’t really make it very often.

Because of the way it is cooked, I don’t think Keema Paratha is an ideal choice for a healthy diet. It’s okay to have it once in a while, but not too often as it can be fatty. And don’t eat paratha daily for sure.

Having said that, it is a delightful choice for when you need a naughty treat though. So just like anything, let’s eat it in moderation ?.

It is also called atta. It’s wholemeal wheat flour from Indian subcontinents. It is used to make their unleavened flatbread such as roti/ chapati, and paratha.

The atta is milled in such a way that the flour has high gluten and the roti can be rolled very thin because of its elasticity.

There are three types of chapati flour. They are white atta, medium atta, and wholemeal atta.

You can feel the difference from its elasticity. Because the browner the flour is, the less the gluten in it that it can be tricky to roll. However, it’s supposedly a better choice for a healthy diet.

Disclaimer though, I personally have never tried these substitutes, but I know some people who have done so. If you do try, perhaps you can share your experience with us in the comments below. Thank you.

In theory, you can use any type of minced meat such as beef, lamb, chicken, or goat. However, in my household, Keema Paratha is always associated with lamb minced meat. As that’s what my kids love. Hence, for this recipe, I use lamb.

But of course, you can always use whichever meat you personally prefer. It’s your choice ?.

Yellow/ brown onions or red onions are good choices. You just have to make sure you chop them as finely as you can.

It’s preferable to use freshly minced ginger and garlic.

I often use the readily crushed ginger garlic that is sold in frozen cubes from the supermarket.

You only need cumin powder, coriander powder, paprika powder (or Kashmiri chilli powder if you prefer your paratha spicy), and ground black pepper.

This one is optional. I sometimes chop fresh chillies as fine as possible and then sprinkle them on my meat just before I roll the paratha as an extra kick of flavour.

As I mentioned above, traditional parathas are made with ghee. But my sister in law only uses a little bit of cooking oil (either sunflower oil or rapeseed oil) and butter.

How to make Keema Paratha

Firstly, make the dough for the paratha by mixing the chapati atta with water little by little. Knead it well. You would aim to get the dough that is soft enough to touch, pliable and not sticky. It is more like kids’ playing dough kind of texture.

Secondly, divide and shape the dough into 8 balls. The balls will be a little smaller than a tennis ball, but a bit bigger than a ping pong ball.

Thirdly, you get the filling ready by mixing the minced meat with onions, ginger garlic paste, and all the spices. You mix and knead it well until all is thoroughly mixed. Divide the meat into 8 equal portions and shape them into balls.

Then, roll the dough into an approximately 20 cm round circle. Put the meat in the middle and flatten it around to cover the dough. Leave a space about 1-inch/ 2cm at the edge of the flattened dough.

After that, make a cut from the centre to the edge. And roll the bread to the side until you get a snail-like shape of a meat dough. Try to cover the meat with the dough at the best you can. And carefully shape and roll it into a nice big ball. Flatten it with your palms before you roll it again with a rolling pin.

Rolling the dough with meat filling can be a bit messy. But it’s okay. When the minced meat is pushed out and leaks out from the dough, I usually just dust it and cover it with a sprinkle of chapati flour.

Your paratha will be about 9-inches/ 23 cm in diameter.

Lastly, when you finish rolling out the dough filled with meat, heat the Tawa/ flat frying pan at medium heat. Put the paratha on the Tawa and let it cook on both sides. It takes about 2 minutes on each side for me.

When the minced meat on both sides of paratha looks cooked, spread a little butter on each side and a teaspoon of cooking oil on the Tawa. Let it cook further for another 2 minutes on each side until you can see that the roti absorbed the fat.

I hope you enjoy the recipe and are now thinking of trying it out. When you do, it will be great if you can share what you think about the recipe in the comments below.

Feel free to share this Keema Paratha recipe. And before you go, don’t forget to check my other recipes that you may like. 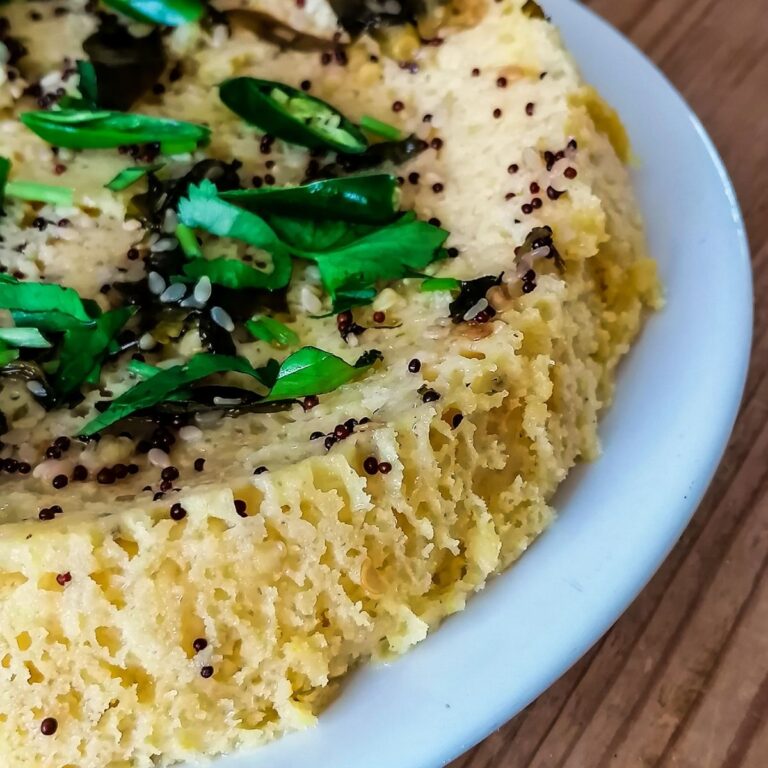 Khaman dhokla is a steamed savoury cake made of gram flour/ chickpea flour and is flavoured with spicy and lemony oil. It is a traditional Gujarati dish that is now popular among Pakistani and Indian cuisines. 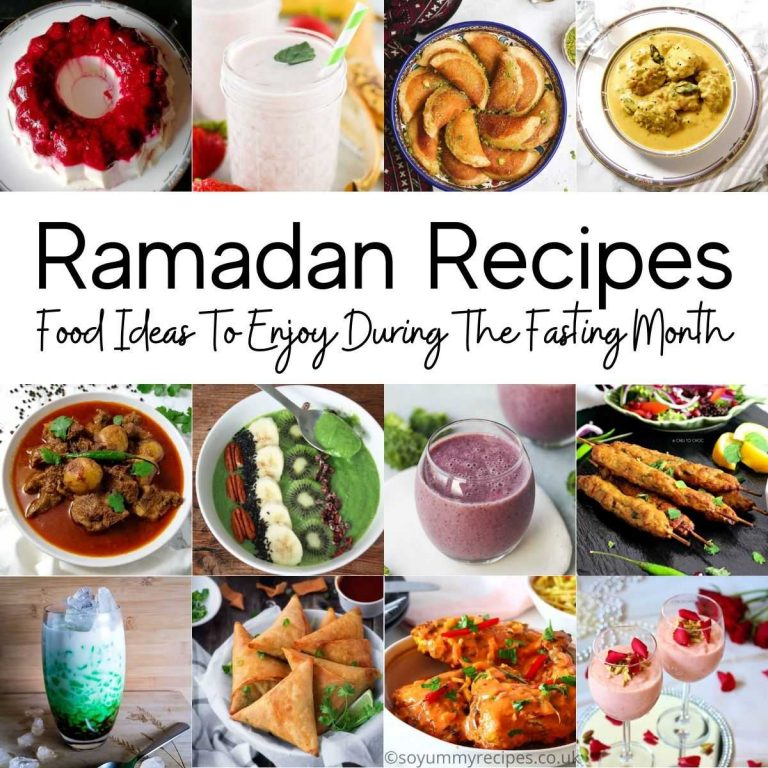 Ramadan recipes you want to try for good foods that can satisfy hunger and appetite. So you can focus on doing ibadah. 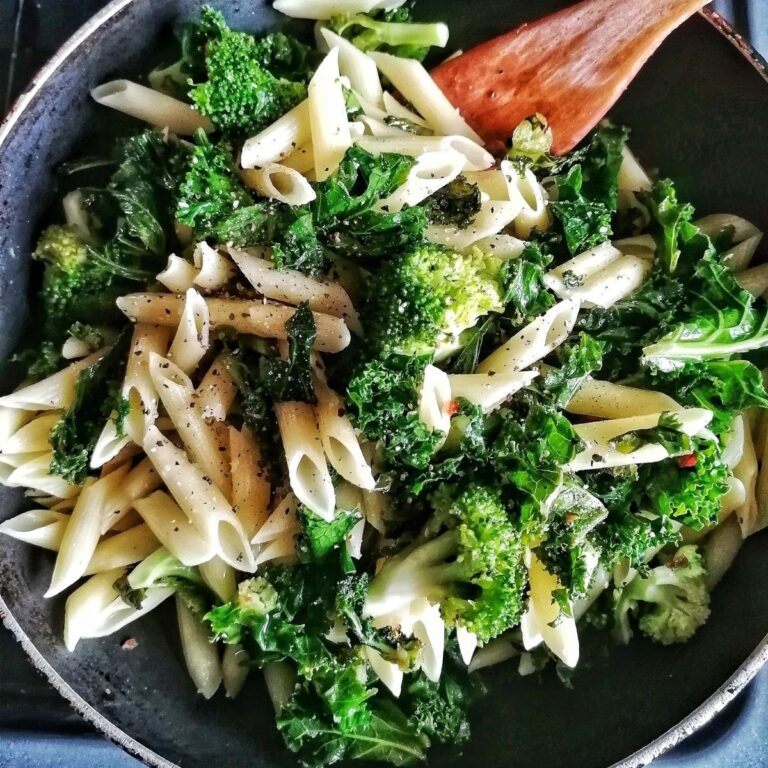 This pasta dish is a good choice when you fancy eating “healthy” meal thanks to its curly kale and broccoli. Ideal choice for vegetarians and vegans too 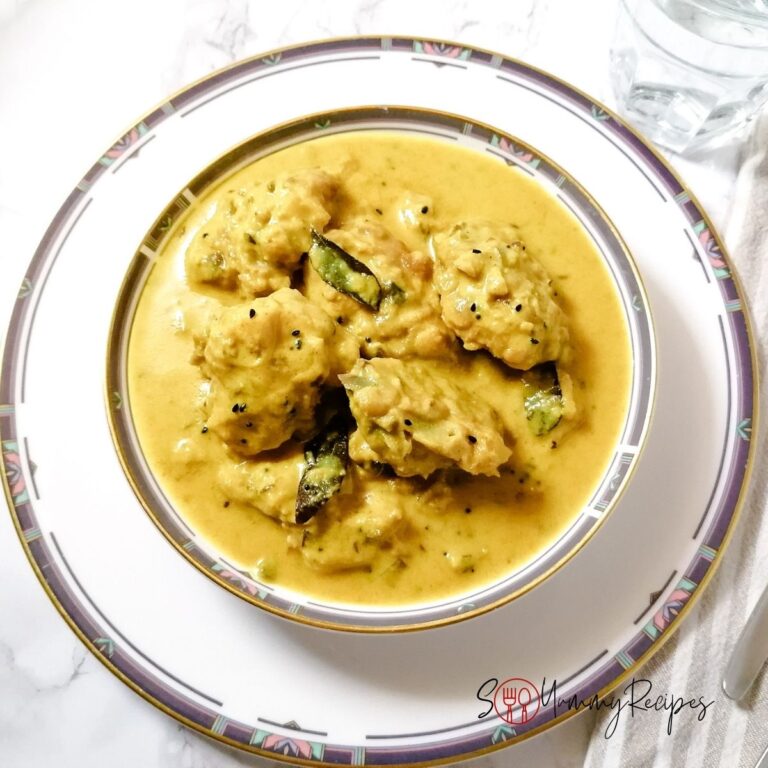 Kadhi pakora is mouth-watering dumplings that will satisfy your savoury cravings for comfort and delicacy.  The dumplings that are made of pakoras are deliciously married with a spicy and creamy yoghurt sauce. One can never get enough of having it. A must-try if you never had it before. What Is Kadhi Pakora? To simply put,… 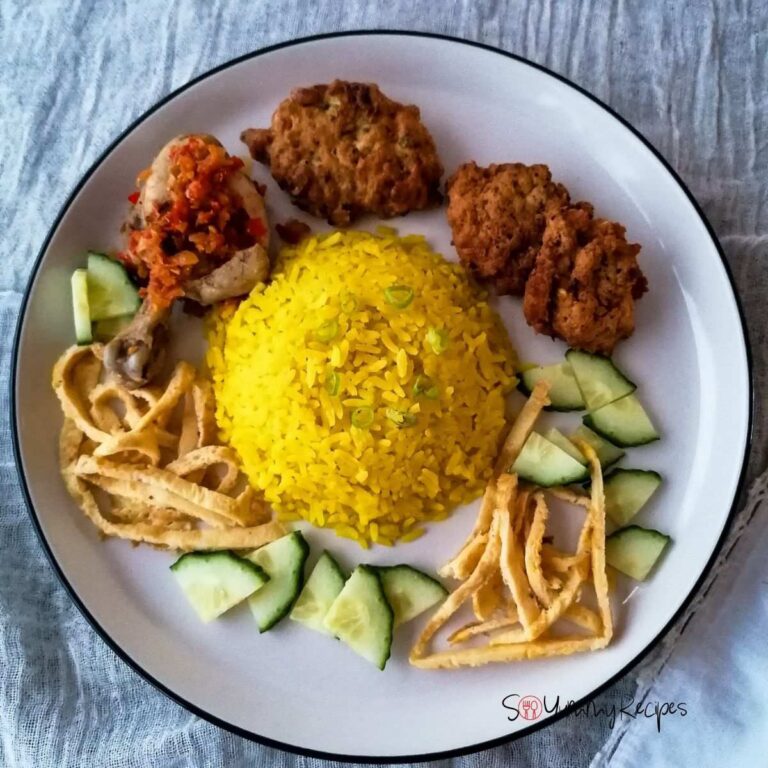 Nasi Kuning is the Indonesian yellow rice cooked in fragrant coconut milk with turmeric. It’s a rice dish that often enjoyed on happy occasions and celebrations. But you can have this delicious vibrant looking rice any time. 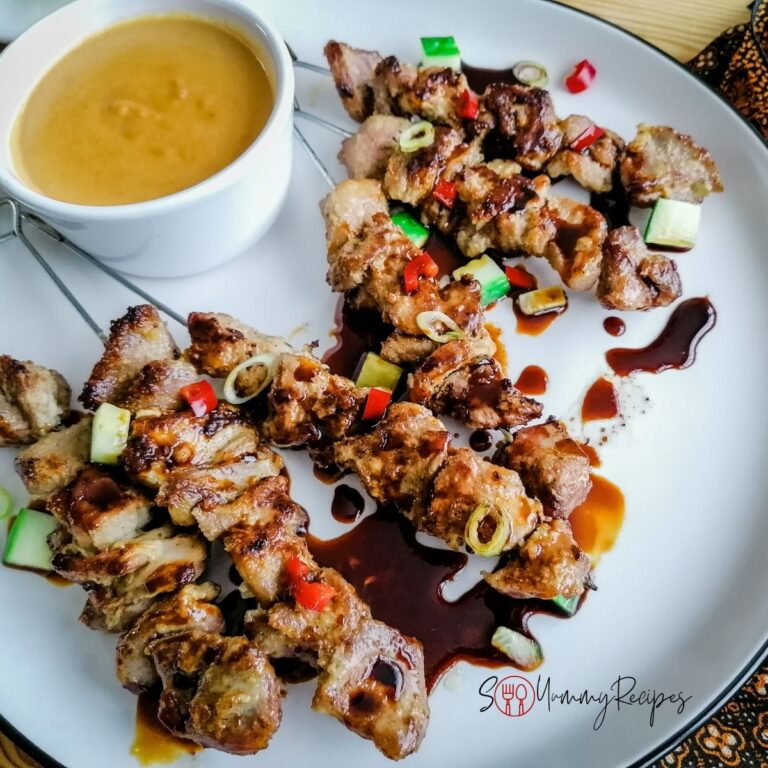 Lamb satay is as delicious as goat satay. This recipe will show you how to make the best and easy satay like the real Indonesian Sate Kambing but using lamb.